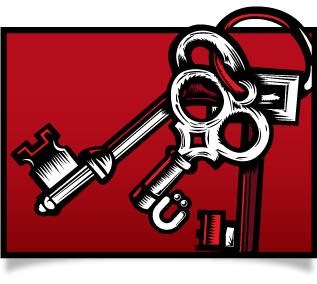 To most people, chastity in the modern 21st Century seems like a bit of an archaic idea. Why would anyone in their right mind want to strap down and lock up their genitals?! Before you choke on your cornflakes at the idea, here’s a little Q & A about chastity. You might just change your mind!

YES! Ever heard of the saying, 'good things come to those who wait'? Just think, if you have had no 'release', all of that testosterone, ejaculate and hours thinking about an orgasm is building up and up until your Keyholder finally unlocks you. The result? Best sex of your life! It really is that simple.

But aren’t chastity devices heavy to wear and obtrusive?

NO! The original designs of chastity devices were worn as belts (chastity belts) and were made from heavy and uncomfortable welded iron or steel. Thankfully, times have changed! Our huge selection of chastity devices at UberKinky consists of traditional-style metal devices, and the best selling and super comfortable CB range.

Won’t being in chastity just make me sexually frustrated?

Isn’t this new dynamic likely to put pressure on my relationship?

So, you’ve been intrigued by the concept of chastity for some time, but you’re still unsure of what it entails? Well luckily for you would-be chaste males/Keyholders out there, UberKinky is here to explain in great detail what you’d be letting yourself in for...

When we refer to chastity play, we specifically mean the practice of a male having his valuables safely locked away for a designated period of time, the duration of which being entirely at the Keyholder’s discretion. A chastity device prevents him from touching himself sexually, or any other way for that matter, until his ultimate release is granted!

It’s pretty explosive when all of those fantasies become a reality!

Today we live in a ‘McDonald's’ culture, we want everything now, and we aren't prepared to wait! Chastity, however, is a waiting game, and the longer the wait the better the result.

Firstly, let’s explore how chastity can be enjoyed as a couple. Relationships can be transient, we can choose different partners nightly if we so desire. We can swing, we can swap, we can experiment with same sex relations, and we can do virtually whatever we like. Yet many of us can remember early relationships, where the touch of a hand or kiss on the cheek could send us into ecstasy. This is what chastity can bring back to a couple, the frission, the electricity, the intense pleasure that so many of us have lost in today's helter-skelter lifestyle. Pleasure can sometimes be like a McDonald's, or any fast-food meal, momentarily satisfactory, fulfilling a need, but nothing substantial. Chastity gives you so much more.

Other people find it incredibly exhilarating to choose an unknown Key Holder via advertisements or online. This adds a different dimension to chastity and offers an additional element of excitement and arousal.

There are so many dynamics involved in chastity, the permutations are endless and every one different, just as we are. But simply ask yourself this; "why eat a burger, when you can have steak?"

If you’re in a committed relationship, but you want to really turn up the heat in your sex play, then chastity could be the answer for you.

Many couples engage in chastity as a means of getting back the desire they felt in the early days of their relationship, when they couldn't wait to have sex, and it lasted for hours not minutes. A time when they were always on each other’s mind.

There is no doubt about it, chastity play results in superior sexual satisfaction! Trying to earn a release, the bottom will be much more attentive to his partner’s needs. Without being distracted by his own selfish wants, his sole focus is pleasuring his Keyholder. He will demonstrate his ability and affection to his partner, going above and beyond in the hope of an ultimate ‘release’..

Aside from being the ultimate tool for submission and power exchange, chastity is the perfect way to ensure that a scene plays out exactly as it should. The best way to keep a naughty slave from misbehaving is to withhold orgasm. In fact it’s the ONLY way to guarantee that they’ll do exactly what they’re told. Keeping someone locked up long term adds an extra level of excitement and demonstrates the commitment of the slave for their Master/Mistress. But, if you're not into long term commitment, chastity play can simply be enjoyed as part of a scene. In this instance UberKinky would recommend one of our devices with added cock and ball torture features.

We’re anything but naive here at UberKinky! We know that there are a LOT of Dominants and slaves out there that don’t live together. So, how do they get the most out of their play? Well, we’re glad you asked! Many people choose to take plenty of photographs to send to their Key Holder. This proves that they are following orders and are committed to their new way of life. In addition, they regularly engage in web cam sessions, phone calls, text communication and e-mail messaging. When temptation comes-a-knocking, it is crucial to be able to call on the Key Holder for support! We don’t want premature ‘release’ unless absolutely necessary!

So, if you're feeling a more open to the idea of chastity now you know a little more about it, check out our other essential guides;